There was a lively buzz in the air as people chatted, and learnt ways to keep healthy. As usual, Delicious Nutritious produced lovely soup, pitta bread and fruit salad 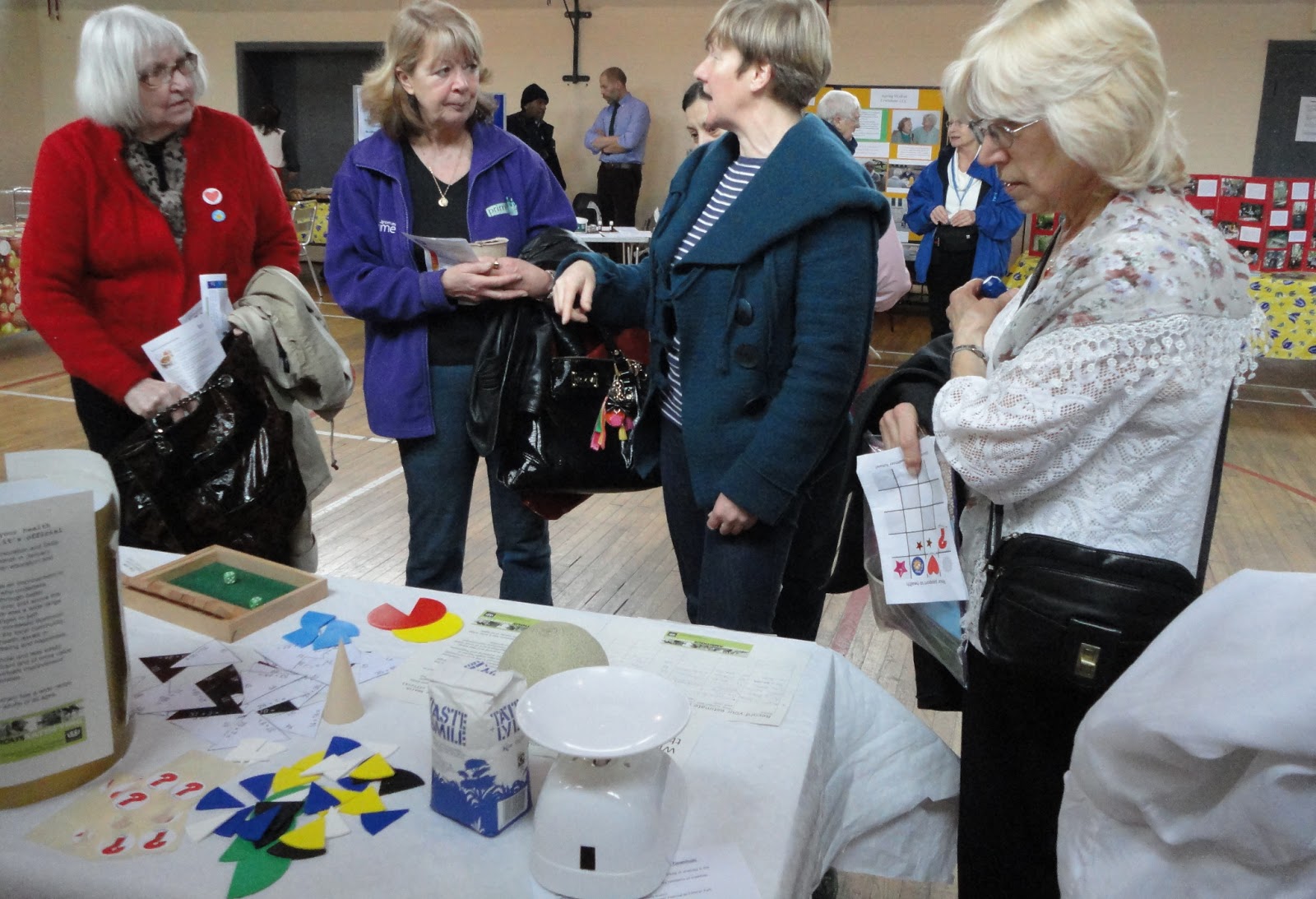 Penny Phillips has kindly provided a review of the day and some photos!
Rozan and Penny attended representing Weight Watchers at this Community Event.
The Community Centre is home to lots of activities, so we had the preschool parents and little people drop in and the Line Dancing group that meet there regularly plus other local people. 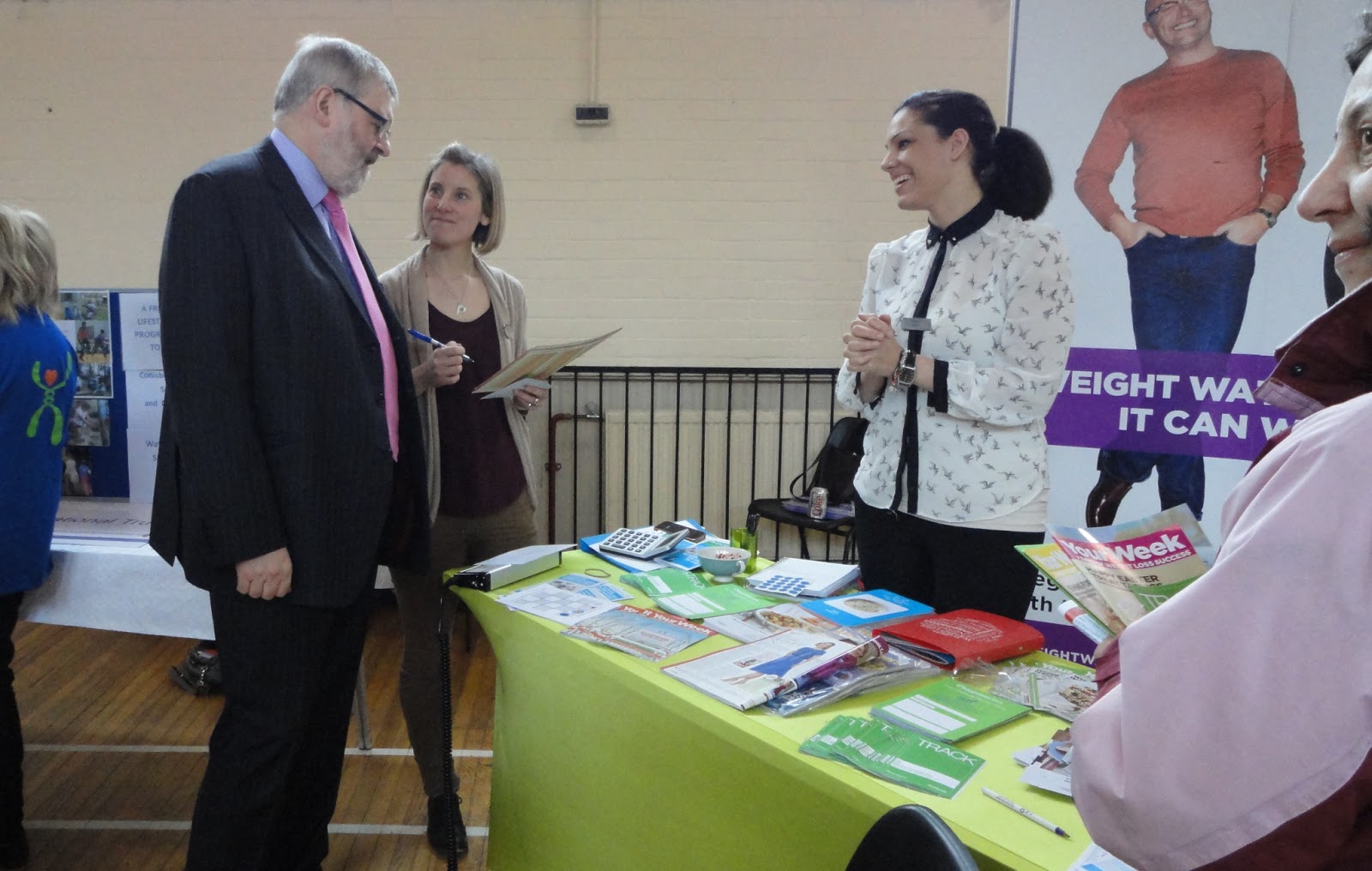 I would estimate 100 people dropped by including the Mayor of Lewisham, Sir Steve Bullock. 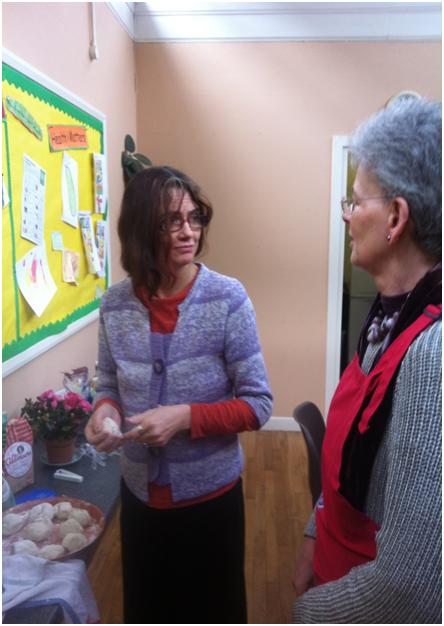 Lauren from Delicious Nutritious making bread whilst catching up with Ruth Webber from the Downham Nutrition Partnership. 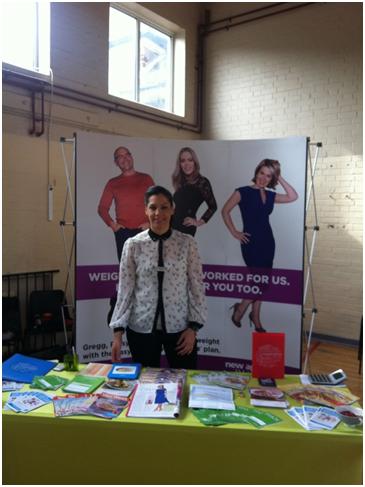 We highlighted WWRS to approximately 10 attendees

We provided meeting information and details on how to join as paying member to around 15 attendees. (If they took an enrolment form we wrote our details on the top and they identified a meeting that would work for them.

Shared information on the WWRS with both who work in the community promoting healthy eating through a range of activities. Including Cook and Eat programmes funded by Public Health Lewisham and the Whitefoot Assembly. 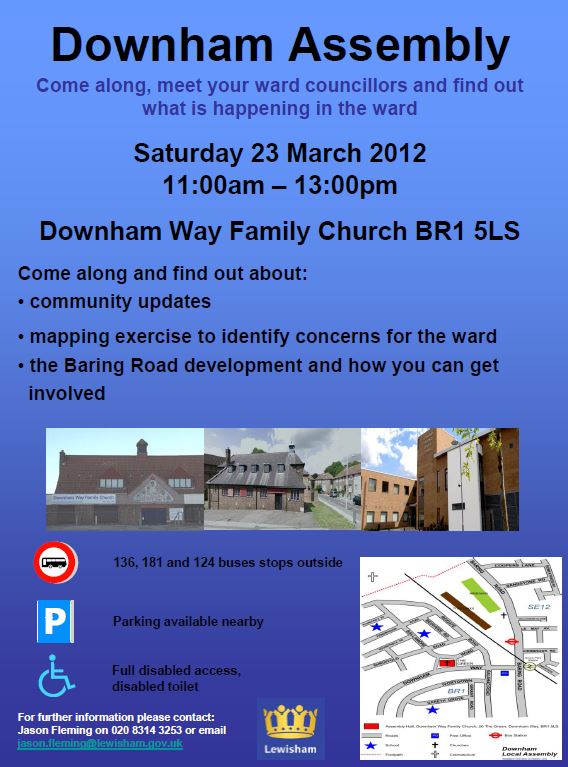 
I've been asked to raise awareness of the potential closure of Downham Fire Station by Councillor Janet Daby, Whitefoot councillor and Cabinet Member for Community Safety in Lewisham. As well as Downham, the proposal is to close New Cross Fire Station too.

A consultation on the closure of Downham and other fire stations across London is being conducted which ends on at 5pm on 28th May 2013. Members of the public can have their say by visiting http://www.london-fire.gov.uk/lsp5.asp, www.saveourstations.org.uk , calling 0800 9888 569, by writing to the London Fire Brigade at 169 Union Street, London, SE1 0LL.

As one of the Local Councillors and Cabinet Member for Community Safety in Lewisham I am most concerned about the proposals from the London Mayor to close Downham Fire Station. With your assistance we need to make residents aware of the proposals and urge them to individually respond to prevent the closure of our local fire station. In the past this station has been saved from closure twice and I am confident we can again do this. The Fire Brigade Union have said the public concern and individual complaints and protests will have most impact to stop this from happening. In Lewisham the proposed closure is for two Lewisham Fire stations to close and this will have a safety impact on the whole of Lewisham. The local population today is more dense compared to when the Downham fire station was first built. I have recently been told more house owners are opening up their fires to save on bills, which is a possible serious safety issue, but most importantly the response time of fire service will be lengthened and this will affect lives. These are a few of the reasons why we need to maintain the service as well as the excellent preventive work the local fire brigade service provides. We need to save Downham Fire Station and the service it provides to Whitefoot, Downham and Bellingham residents, as well as to the rest of Lewisham.

In your newsletter/Website please tell residents what I have said and inform them the consultation ends at 5pm on Tuesday 28 May 2013. Members of the public can have their say by visiting http://www.london-fire.gov.uk/lsp5.asp, www.saveourstations.org.uk , calling 0800 9888 569, by writing to the London Fire Brigade at 169 Union Street, London, SE1 0LL.

The link below provides more information about the proposals
http://www.london-fire.gov.uk/news/LatestNewsReleases_Sayonfirebrigadeproposals.asp#.UUWQ-C5FDIU

The proposals would see 12 fire stations close, seven fire stations that currently have two fire engines moving to one fire engine, and four stations gaining a fire engine (a net reduction of 18 fire engines) and a reduction in the number of firefighter posts of 520. Under the proposals, the Commissioner of the London Fire Brigade believes it would be possible to make these changes without making any operational firefighters compulsorily redundant. Details of the proposed changes are:

The Draft Fifth London Safety Plan sets out a range of other proposals including how the Brigade may start recovering costs from persistent false alarm offenders, encourage the installation of sprinkler systems where appropriate, and explore setting up the world’s first 999 twitter feed.

Members of the London Fire and Emergency Planning Authority (LFEPA) originally met on Monday 21 January 2013 to discuss the proposals. An amendment was made by Labour members, which was  supported by Liberal Democrat and Green members. The amendment meant that LFEPA did not agree to consultation on the part of the plan which deals with the closure of fire stations, or loss of appliances or operational posts.

The Conservative Members of the Authority opposed the amendment and instead unanimously supported the Commissioner’s proposals. Following this, the Mayor of London used his powers of direction to instruct  LFEPA to begin a public consultation, by 13 February, on the version of the plan that was originally presented to the Authority.
At an extraordinary meeting of the Authority on Monday 11 February, a majority of members supported a resolution to stop compliance with the Mayor’s direction.

Subsequently, the Mayor wrote to LFEPA saying that he would seek legal redress to ensure that his direction was followed. At a meeting of the Appointments and Urgency Committee on Tuesday 26 February members voted to authorise that public consultation on the whole of the draft fifth London Safety Plan could begin.
Posted by Unknown at 10:35 1 comment: 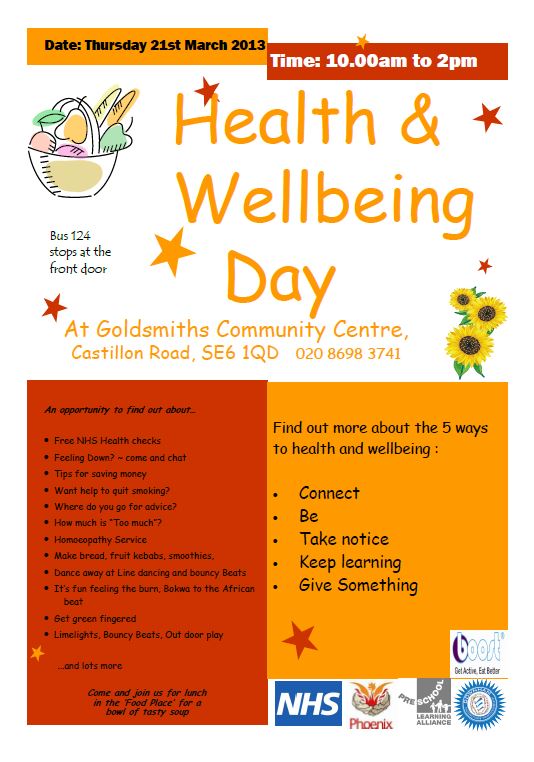 There will be something for everyone at the community centre from advice to health checks to food demonstrations, line dancing and Bokwa, children's activities, making your own potions and lotions, a guided walk and information about the local area. On completion of a short survey you can claim a free lunch too!


In the Food Place there will be:

In the IT Suite from 12-2pm Lewisham CAB will be showing you how to get the best energy deals and to use their amazing online advice guide. You need to pre-book for this 2 hour session please contact .

In the Goldsmiths Wellbeing Room (Room 3) you are invited to make your own potions and lotions with our resident homeopath.

All about... The Food Place

What is The Food Place?

Last summer the cafe at Goldsmiths Community Centre closed, after 12 years of operation. Our centre users miss it, and so do we! But... no one could make a go of it any more as a business, and we had to look at different ways we could use it, bring some income to the community centre and most importantly invite local people in!
A group of local organisations got together and have been planning the way forward for this space. The first meeting took place at the end of October 2012, and we have been meeting monthly since then and inviting guests from the local allotment society and our local councillor. We renamed the space The Food Place to reflect the variety of events and activities that would be happening. We first thought up the name, back in February 2010 - http://goldcatcafe.blogspot.co.uk/2010/02/food-place-summary-of-10-feb-workshop.html
Our community payback team sorted out the store cupboard and kitchen units, thoroughly cleaned and repainted the cupboard and put everything back in apple pie order. Over Christmas the floor was sanded and treated ready for the new year and new activities. At the last hygiene inspection, it received a five star rating!
The Food Place got off to a great start in the New Year. Three regular activities are running from baby weaning, food explorers for under 5s and cooking your own evening meals and we have put on a couple of special events, a Love Food Hate Waste workshop and A Taste of Scotland. The space is also being rented regularly for private functions, bringing much needed income to the Goldsmiths Community Association. For more details about regular activities including Yummy Explorers and Food Explorers contact Jo on 020 8695 5955.


‘Come and Cook your Evening Meal!’
This new project running at Goldsmiths Community Centre is for all ages and free for anyone in Lewisham who not only wants to learn cooking skills but enjoy it. Cllr Janet Daby, who was involved in the initial discussions of the project, was there on the first evening to support and offer her encouragement to volunteers. Rosalynn, Cllr Daby and Abi at the first session of Come and Cook your Evening Meal
She comments, “It is lovely project to be a part of from the beginning, and one I feel will be a great success. The aim was to encourage cooking at home, making people aware of being nutritious and eating the right foods. It was also to offer cooking skills to those that lack them as well as showing them that it can be fun and easy to do. There is no doubt that children, parents and residents will love it. My best wishes go out to everyone who takes part in improving their skills and learning how to cook. I remember the home economic classes I took at school which I feel should be brought back as part of every person’s learning”.
Cllr Daby is also working with churches in the Whitefoot area to set up a food bank. She feels the food bank along with this project will support local people to provide for themselves and their families in increasing hard times. She aims to think ahead of October 2013 when the coalition government’s Universal Credit is put into effect and where people could be further pushed into economic hardship as a result of it.
There are places available on these sessions please contact Delphine 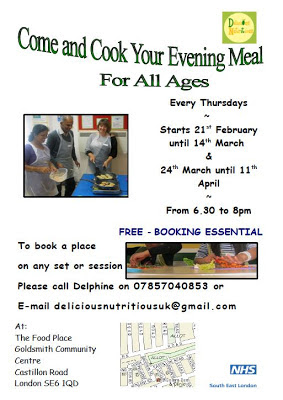 Och aye the noo! A Taste... of Scotland
Following successful pilots by Downham Nutrition Partnership of a Taste of Italy and A Taste of China last year, 2013 brought A Taste of Scotland to The Food Place. 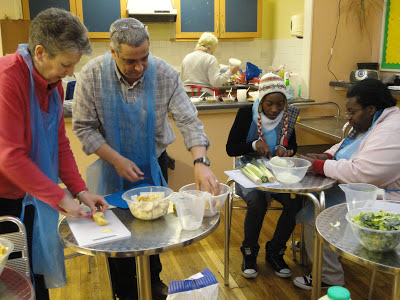 Chopping the tatties and leeks for A Taste of Scotland
We chopped leeks and tatties for leek and potato soup, cooked finnan (smoked) haddock for cullen skink and even sampled some haggis! As a Dutch waitress once said to me when I asked what was in the croquettes 'You don't want to know'. Also on the menu were Scottish cheeses, oatcakes, shortbread and cranachan. A very enjoyable evening to the accompaniment of traditional Scottish music.
Coming soon, a Taste of Jamaica.

And to whet your appetite and see the progress, some photos of what we've been doing! 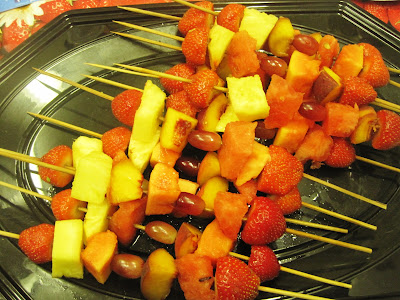 Fruit kebabs prepared by Delicious Nutritious for the DNP AGM 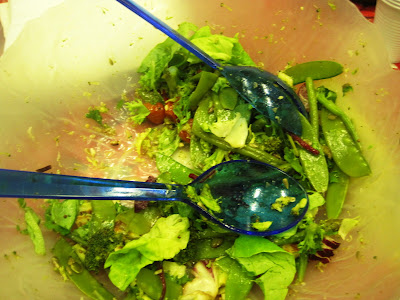 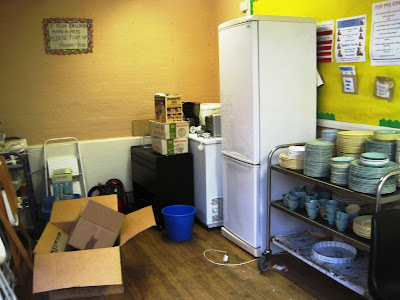 Contents of The Food Place storeroom, before it was cleaned and repainted 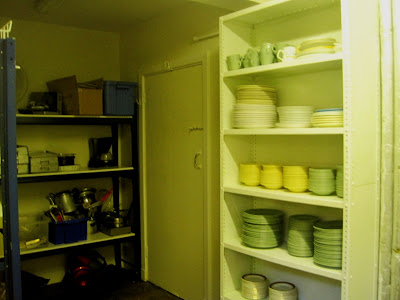 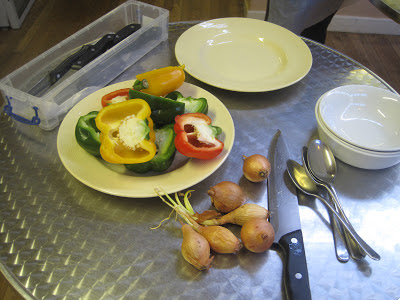 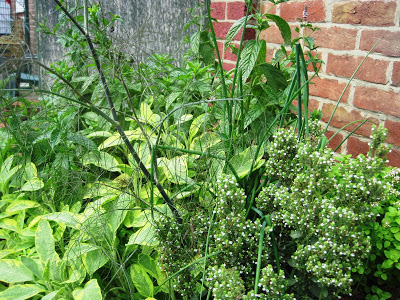 Fresh herbs from the community garden 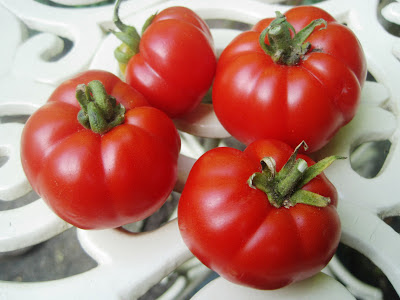 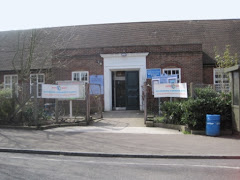